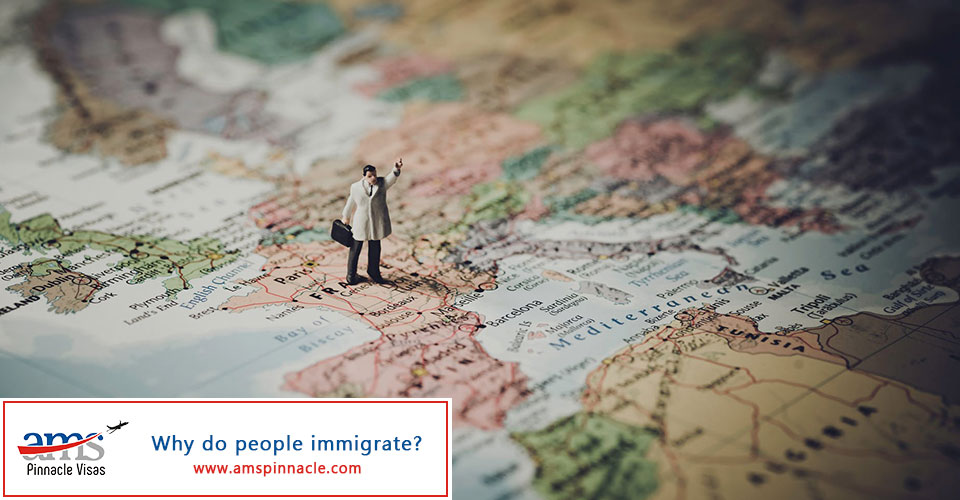 In the history of mankind, people have migrated or moved from place to place. Earlier the nomads used to roam around in different places and looked for new pastures for livestock, fishery and hunting. As civilization came, they started to migrate in search of more fertile land and make new inhabitation. Even today the migration has not ended. People these days still migrate for a variety of reasons, the prominent ones being economic and social reasons. Statisticians believe that more than 70 percent of immigrants are young adults between the ages of 25 and 39 while very fewer elderly people also do migrate. Immigration is a process that has been happening ever since mankind is there. Today the migration that is happening can be seen to occur within a country or to another country. When the migration is within the country it usually is the movement of people from rural places to townships for better job opportunities and quality of life. Immigration is the movement of people from one country to another. Several factors could drive the process of immigration. Major factors are economic, social, environmental and safety factors.

Economic factors are the major factor that is cited for the migration. It is customary for populations from countries having poor economies to try to migrate to a rich economy country. The transition and successful immigration to a better economy will ensure steady incomes and affordability of better quality of life. Hence the youth are always attracted to immigration. Hard working young professionals dream of working in big and renowned companies of the world. The bright students can get an opportunity to work here if they migrate to such countries. Hence economic motivation is the major driving force for immigrating to developed countries.

Social factors like good social structure of life, various facilities for healthcare and education for family and children are not available in many countries of the world. This is the major concern of people who want to lead a good quality of life. Hence such people tend to immigrate to a country that offers all such benefits to its citizens. In a developed country more and better paying jobs are available. The healthcare systems and facilities are very good in such places. Hence it is obvious that such countries attract many immigrants.

Environmental factors can also be a cause due to which many people want to immigrate to another country. Various social factors are the pollution in a certain place, which can lead to poor life quality. Few places are prone to natural disasters and devastations like earthquakes and tsunamis. Nobody would like to leave in such areas; hence they immigrate to better and safer places.

Safety factors means those factors which ensure the safety of the citizens of a country. In certain parts of the world there are persecution and discrimination based on religion and political beliefs. Terrorism also comes under one of safety factors in some parts of the world. People who are struck in such places will immigrate at the first chance.

Unavoidable traveling during times of COVID-19